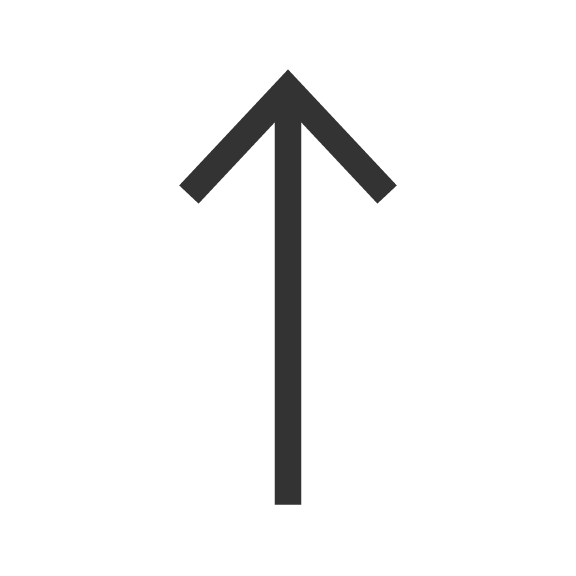 WE KNOW OUR USERS, BUT DO OUR USERS KNOW US?

Following the rebranding of the online dating app, Zoosk, there was a need to redesign the homepage to ensure all customer-facing products were telling the same story: Zoosk is a major online dating app that believes love does not come first, but rather, first comes "like" or the genuine connection felt when you first meet someone. With over 35 million members in over 80 countries worldwide and as the main customer-facing website, the homepage needed to undeniably ooze authentic "first comes like," not love.

In addition to the broken parallax scrolling on the old homepage, the visuals and copy quickly became outdated and unfamiliar as it focused on mostly algorithmic/product features and lacked humanness and emotion.

Working with a diverse team of product managers, developers, user researchers, marketing managers, and content strategists, the new design had to accomplish business goals, induce emotion, and scale and adapt easily. Consequently, within the first 2 weeks of launch, user sign-ups increased by nearly 20%.

Check out some of Zoosk's marketing designs here.

If online dating was a spectrum,
Zoosk occupied the space
between hookups and marriage.

WHO ARE OUR USERS?

In collaboration with UX researchers, product managers, and marketing managers, we conducted customer and market research to drive our planning phase. These are the key insights that defined the launch version of the website: 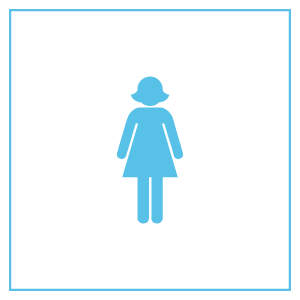 Majority of Zoosk's users are female and aged between 45-60 years old. They aren't the most tech savvy and appreciate simplicity and transparency. 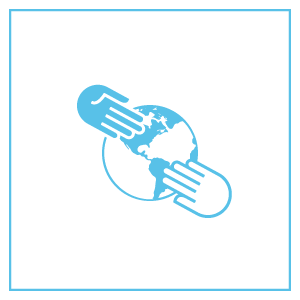 35 million users are located around the world, in 80 different countries. 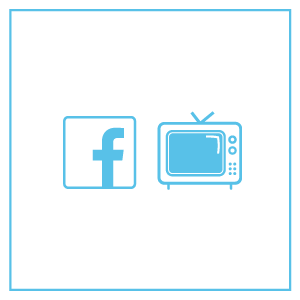 Customers mainly consume and interact with Zoosk on Facebook and TV via commercials, talk shows, and news segments. 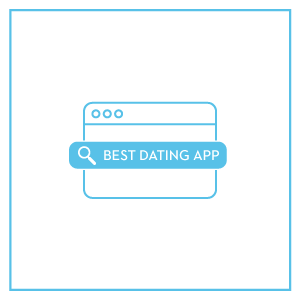 Most of the homepage visitors are re-directed from search queries - the website doesn't get much organic traffic. 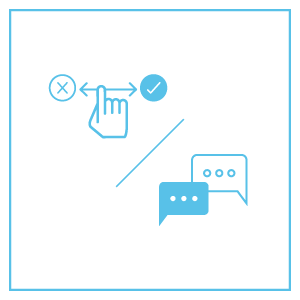 The 2 most used features of the app are Messages (5 million sent daily!) and Carousel (swiping through matches). 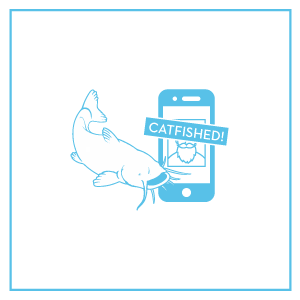 In addition to rate of success, security and scamming are our customers' main concerns. 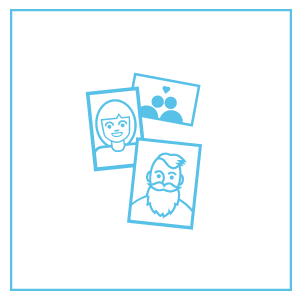 AND WHAT ARE THEIR PERSONAS?

Using the insights above, I created 4 main personas to categorize the website's visitors in order to better understand how to uniquely cater to them: 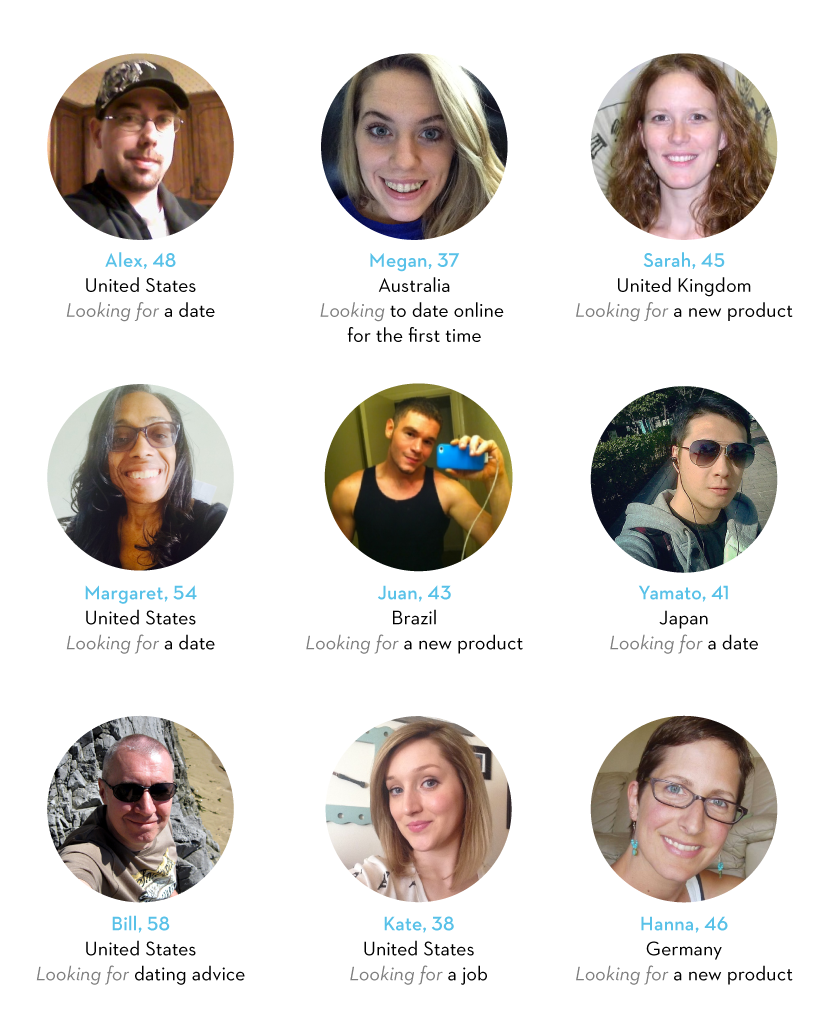 _Not as tech savvy

_International (over 80 countries and 27 languages represented)

PERSONA 2
"DATING ON MY MIND"

_Online daters looking to date for the first time

_Advertisers looking to partner with Zoosk or advertise in the product

_People interested in the product, company, and business such as investors and job seekers

To inform users and reaffirm Zoosk's position in the online dating industry, we focused on 3 main value propositions to differentiate Zoosk from its competition:

These described Zoosk as a company that:

1. Values a personalized approach to dating:

2. Cares about safety and security:

With the stakeholders, I mapped out the main components of the homepage: sign up funnel, value props, and user photos.

While the initial wireframes, displayed below, contained the required components, I felt the need to rethink the direction and innovate; from a design perspective, the initial wireframes mimicked common website templates and lacked personality and a deeper understanding of our brand and user base. 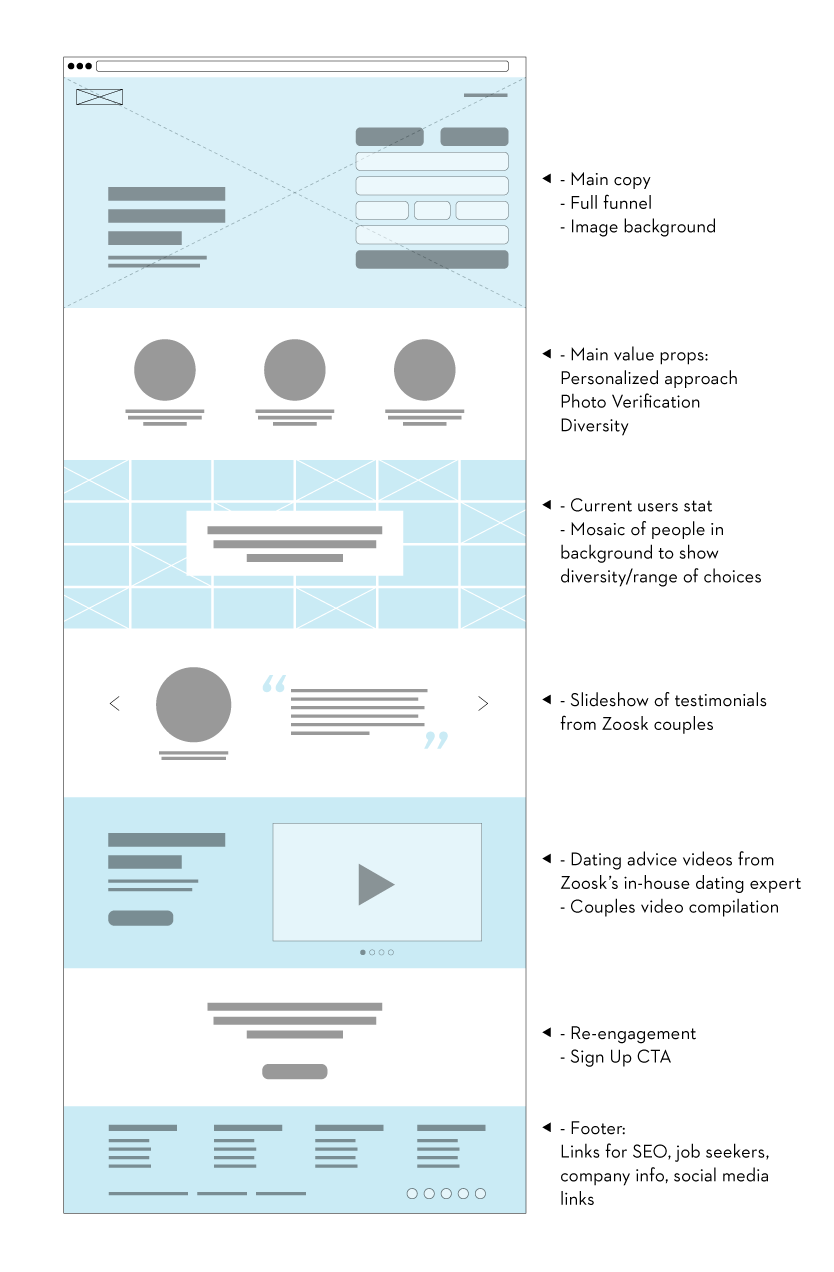 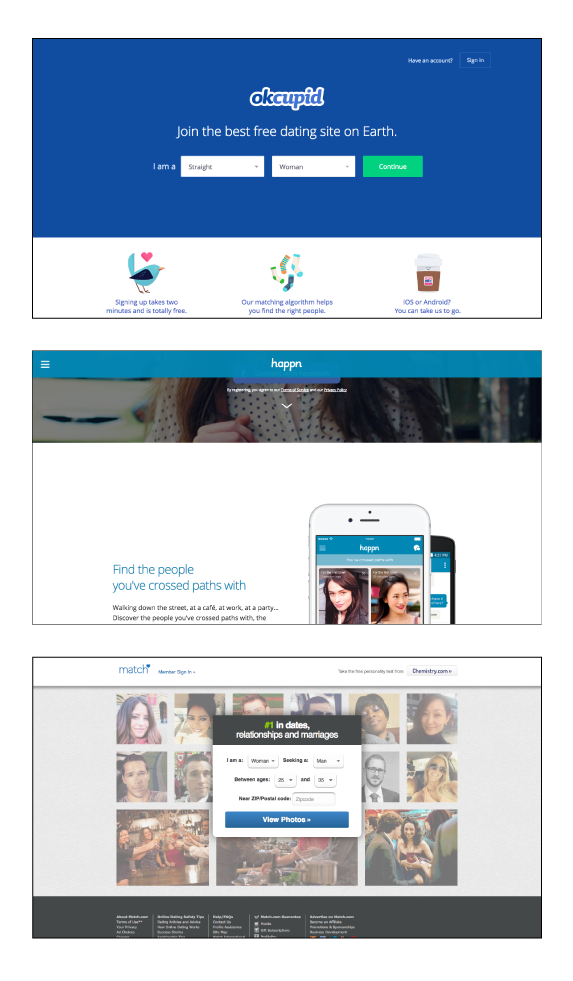 For Zoosk's homepage, I saw a rare opportunity to bring a new, streamlined (and on-trend) take on web design in online dating.

I worked with our senior TV buyer to better understand how our users were reacting to Zoosk's new TV commercials that featured visually stunning and emotional scenes of living in those genuine first moments of meeting someone, depicted as fun, authentic first dates.

Through in-person interactions, community outreach, and in-app surveys, we found that after watching the commercials:

Our users felt that Zoosk is a fun dating app about authenticity and genuine first moments.

Our users felt that Zoosk is a safe and legitimate dating app. Majority of users were excited about the Photo Verification feature.

Our users felt more positive about Zoosk as a dating app that emphasizes meeting and genuinely liking people. Majority of users would recommend the app to their friends.

The increase in brand awareness and consideration led to a 15% increase in registrations. With a fixed deadline and limited budget, I repurposed the successful video footage for use as a hero video in my design iterations. 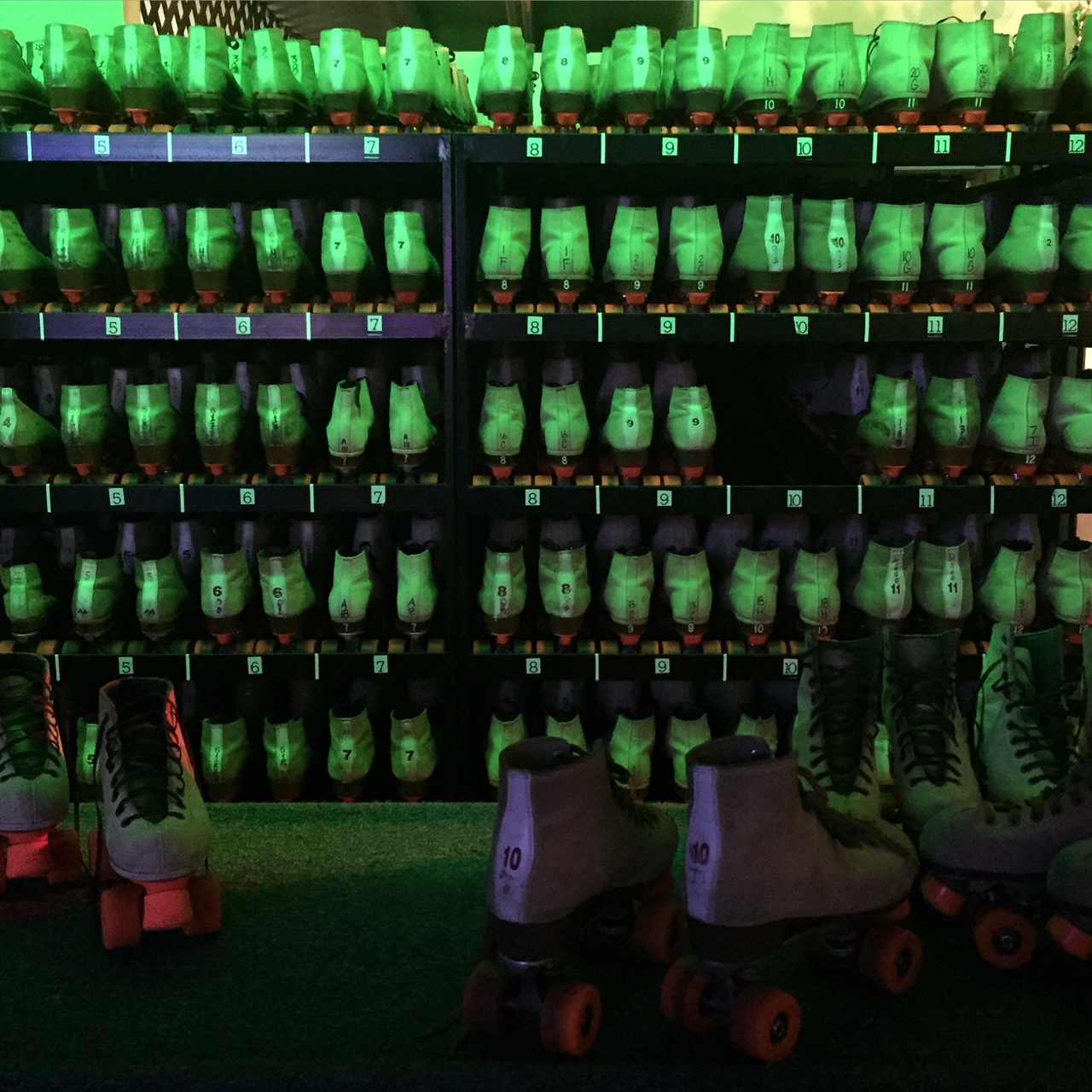 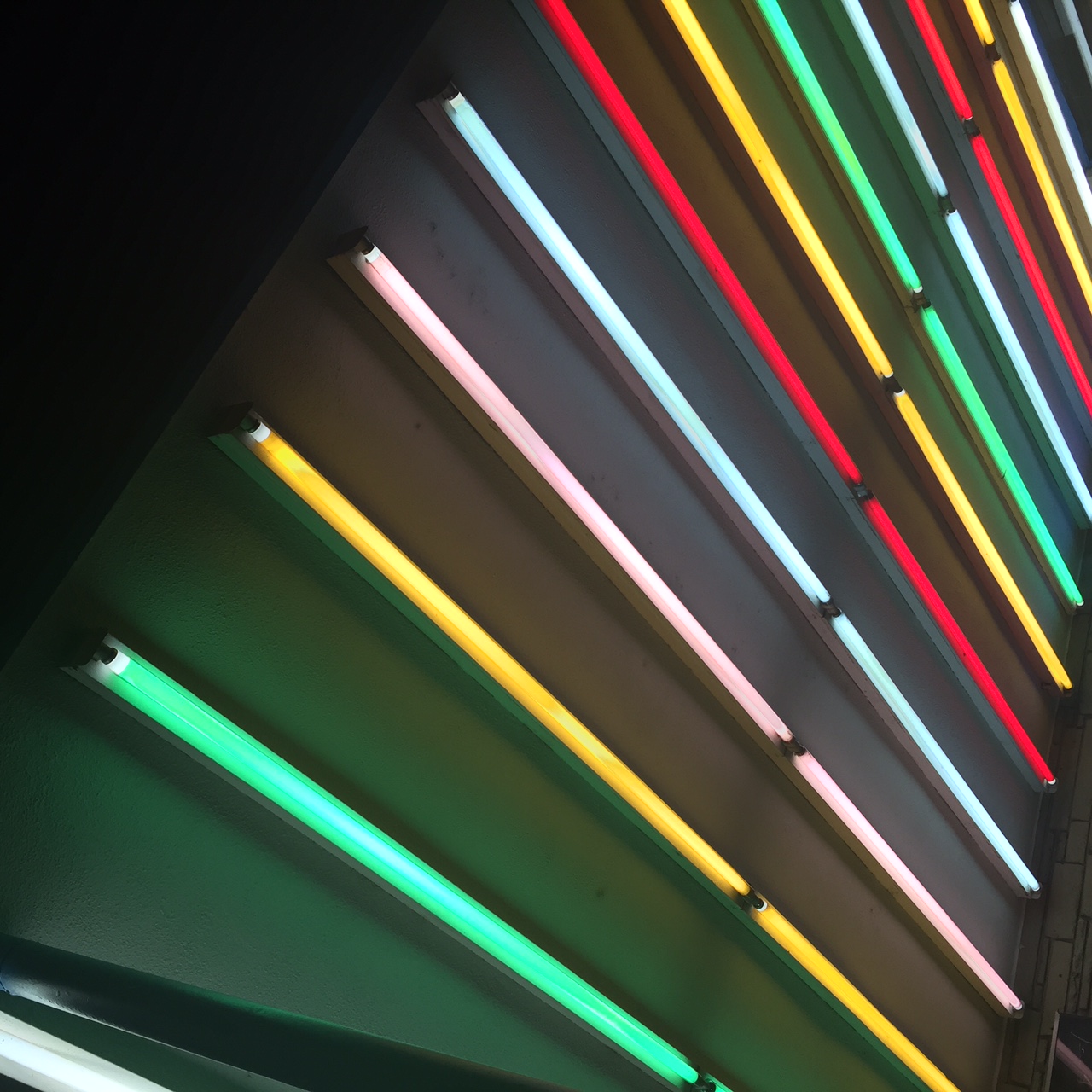 Behind-the-scenes on-set of one of Zoosk's commercials: a first date at a roller rink. Shot at the Moonlight Rollerway in Glendale, CA with Radical Media and MUH-TAY-ZIK | HOF-FER.

I explored reducing content and scrolling in favor of a digestible, informative single screen homepage.

In doing so, I reinterpreted the value propositions from a visual perspective:

Research proved that our customers respond better to images and stories of happy, cheery people. I therefore removed all technical language that dehumanized the dating experience, namely the often misunderstood phrase "Behavioral Matchmaking," and focused on positive, empowering messaging.

A number ticker displays the growing number of messages sent daily between millions of members. The statistic validates the product as legitimate without explicitly stating so.

The hero video/image displays imagery of people from around the world, all races and genders, both single and in a successful relationship. 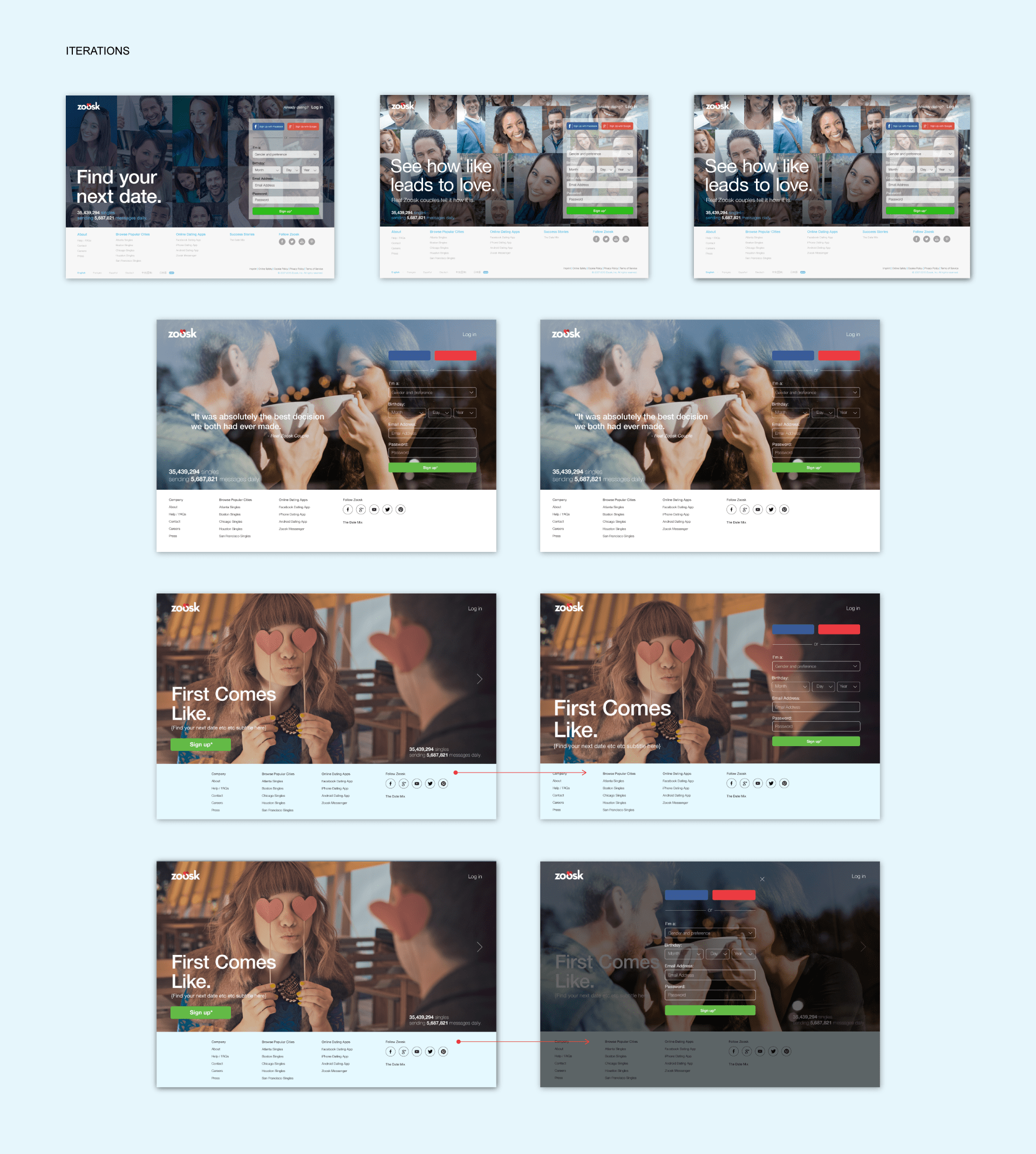 The new approach to Zoosk's website design sought to reaffirm the Zoosk brand position in the market and drive conversions. Below are the specific needs of the project and the ways in which the resulting design met those needs:

_Responsive across all platforms 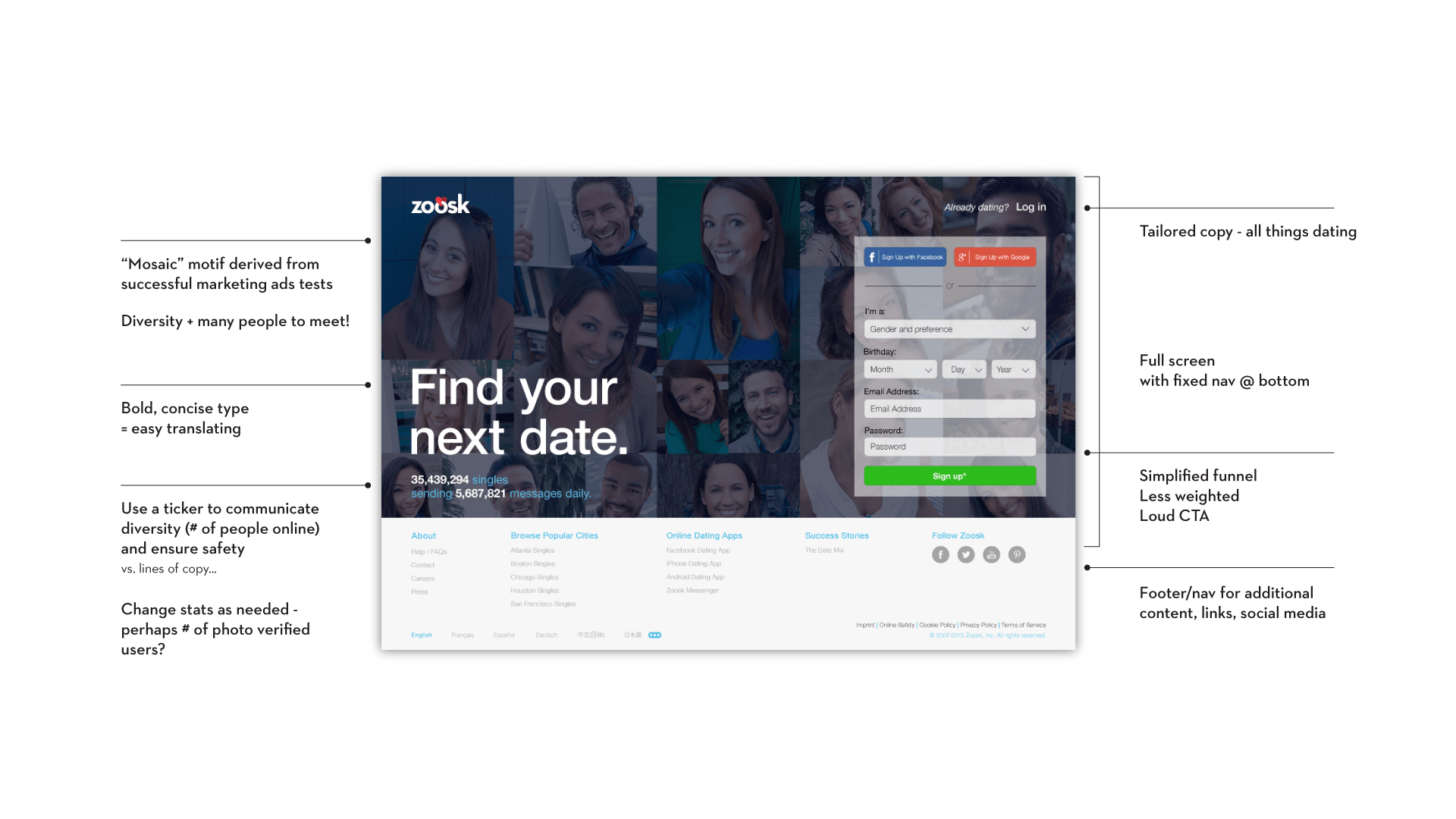 Interested in seeing more product, visual, or identity design projects? Have a project in mind and need design help? Want a collaborator to bring a vision to life?

Please feel free to reach out to me via the form below. I look forward to hearing from you!

I've received your message and will be in touch shortly.
Have a great day! 🙃
Oops! Something went wrong while sending your message. Please try again.